Build a stadium and at the same time use the space you have efficiently. Just put one on the roof of a shopping center! FK Voždovac is a beautiful and unique example of this. About nine years ago, the club, which is named after the suburb of the same name in Belgrade, Serbia, got a new home base at this special location. In de Hekken is there to check whether the experience here is literally and figuratively high.

Sunday March 1. Waking up in Belgrade, we immediately look forward to the match. Not necessarily the one between FK Voždovac and FK Vojvodina, but the one between city rivals Red Star and Partizan.Anyway, to kill the time, after a quick breakfast we set course for Voždovac Shopping Center. Not for shopping, but to attend a Serbian Superliga match.

FK Voždovac is a merger of Zeleznik Belgrade and Voždovac Belgrade that has been in existence since 2005. Zeleznik was founded about 90 years ago and they were mainly active in the lower football regions. From the moment Yugoslavia fell apart, Zeleznik slowly blossomed. The top division was eventually reached and in 2005 even the cup was won. That same year, Zeleznik merged due to financial problems with Voždovac, who played a division lower. Not a bad decision from a sporting point of view, as FK Voždovac is still active in the Superliga.
Today’s opponent, FK Vojvodina, is from Novi Sad, Serbia’s second largest city. The club has been around for over 100 years and it also has branches in basketball, handball, ice hockey and baseball. 6 years ago, the cup was a success. Dušan Tadić and Sergej Milinković-Savić are well-known former players of Vojvodina.

A taxi ride of a few minutes takes us to the entrance of the shopping center. Fences, police and stewards on the corner of the gigantic building betray the entrance for the away supporters. Looking for where to buy tickets, we are referred by a flight attendant. A desk in the heart of the Shopping Center is the point of sale where we can buy match tickets. It seems we are not the only ones who want to get a ticket, because the line is so long that we almost have one leg in the local supermarket. A Serb comes to us and asks something. We indicate that we do not understand and the man tries it with a waiting person in front of us. He also makes a gesture that he doesn’t understand a word of it. We know enough: there will probably be more hoppers in attendance than local supporters.

Suddenly there is a bit of momentum in ticket sales. The row gets a longer tail, but luckily it’s our turn. On presentation of your proof of identity, you will receive a ticket for 1 euro 50. We are talking about Serbia’s top division here, insane. Fortunately, there are still countries with affordable prices. A security guard next to the desk tells us to walk through the parking garage to reach the correct entrance. Then a few stairs up and we reach the ‘rooftop’. Perfect timing, because the game starts in three minutes.

Before we can pick a spot, we are searched for a while. An old bald flight attendant taps his knuckles on my jacket pocket. I take out my wallet and he points to the small change pocket. In Serbia they are severely allergic to coins at football matches. Afraid of this being thrown onto the field. Fortunately I only have 80 euro cents with me and the steward puts the coins on a cabinet, on top of a mountain of other coins. A collection Scrooge McDuck would love to swim in. The steward shrugs and gives me a helpless look. “Those are the rules, friend.”

While looking for a seat, we notice that there are groundhoppers almost everywhere around us. Too bad, the real club culture is hard to taste because we hear more Danish, German and Polish words around us than Serbian.

A group of tourists sitting in the front row are busy taking pictures for almost the entire match. Stadium photos, selfies and even group photos. It hardly seems to bother them that some supporters look at their coarse acorns. A group cloth is conjured up for fun and the photo shoot happily continues. Fortunately, there is still something to enjoy, because the branch is more crowded after a few minutes. These supporters all sing loudly as they watch the two teams rest with a 1-1 draw.

The home fans need to get going. They also only managed to collect themselves late in the first half, but then on the short side on the other side of the branch. Flags, cloths and uniform shirts characterize the ‘hard core’ of the home team. The 1-2 is actually quite unexpected. A counter is nicely completed and the striker puts his finger dirty in front of his mouth. He does this towards the home crowd. Four seconds later, he finds out that there are also many away supporters in the home stands. He raises his thumb and winks at one of these away supporters.
The standings seem to make little difference to the fanatical home supporters. The shirts are taken off and it looks like they are simply having a party. Or they just enjoy a spring-like sun, that is of course also possible.

There are no more goals and the players of Vojvodina celebrate the victory with the away supporters after the final whistle. Nice sight, especially with the skyline of central Belgrade in the background. This is faintly visible through the nets, making the stadium somewhat special. Furthermore, it is a modern and atmospheric box, good for more than 5000 seats. Large concrete posts can obscure the view, depending on the seat you have. Despite all the tourists, it is a unique experience. A football game several meters high, on a shopping mall. While you’re in the area, this stadium is definitely worth a visit. 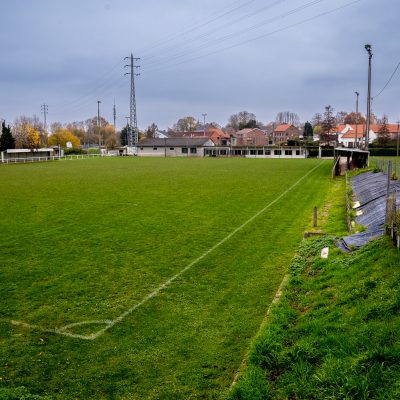 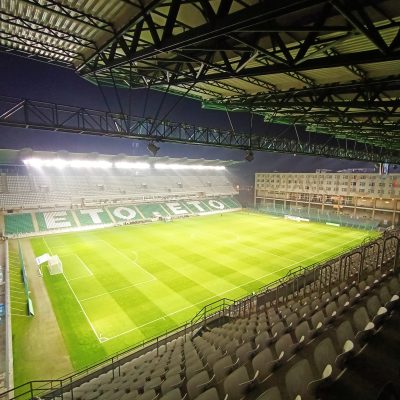 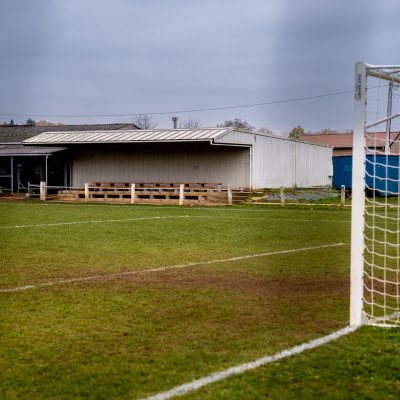 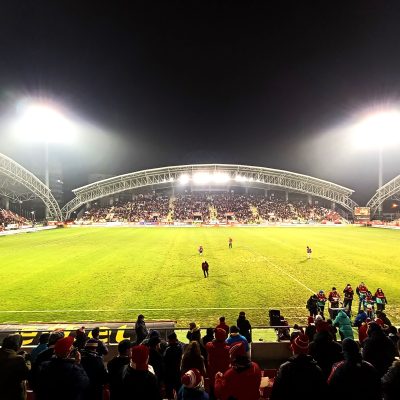