Last week Carl Zeiss Jena secretly played a practice match against RB Leipzig. When the supporters got wind of this, a statement appeared on the website of the Horda Azzuro, the ultras of the club. “No collaboration with Red Bull Leipzig!”. The hatred of Red Bull Leipzig from the German scene is nothing new, but for Carl Zeiss Jena supporters it is even more painful. They were one of the first supporter groups to protest against the Red Bull monstrosity and are therefore rightfully disappointed in the club.

Carl Zeiss Jena’s hatred of RB Leipzig is well known and in 2009 the match between the two clubs got out of hand. Supporters of Jena tried to prevent the team bus from arriving at the stadium. In 2013, the supporters of Jena hung the following satirical flags in the branch in Leipzig. With the cloths they ridiculed the supporters of the club and their lack of identity and history.

Keeping the contest secret is no accident. German clubs are well aware of the status of the Leipzig marketing toy and know that cooperation with that club could lead to protests. Earlier, a practice match already caused considerable protest by supporters of Chemnitzer FC. Several practice matches have also been canceled after pressure from the supporters. The Horda Azzuro also indicates that after the initial shock, they were mostly disappointed in the club’s leadership. They are now also demanding a commitment from the board: that the club will no longer have any form of cooperation with the advertising column for energy drinks.

A few days after the statement, the Horda Azzuro hung the cloths below around the stadium and the training complex. The statement should be clear. No collaboration with Red Bull Leipzig. Not now, not tomorrow, not ever! 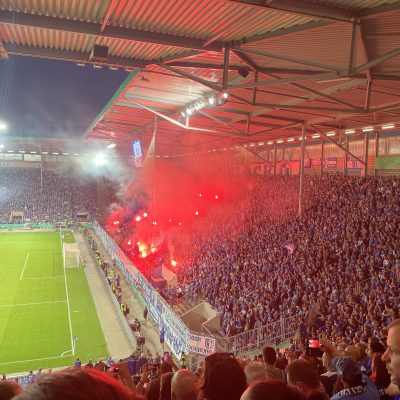