The most successful and most popular club in Chile is by far Colo-Colo. The club has, among other things, 32 national titles to its name and is the only Chilean club to win the Copa Libertadores. Besides the fact that the trophy cabinet is extraordinarily well-stocked, Colo-Colo also has Chile’s most notorious following. Fights with security, the police and the other party are commonplace. In addition, robberies around the stadium are said to be a daily occurrence. Everyone we spoke to advised us as blond Dutchmen not to go to Santiago South. Traveling in the evening would be idiocy. Tonight Colo-Colo will play against Huachipato at 21:00, enough reasons to take a look at Estadio Monumental!

Our knowledge of Chilean football does not extend much further than a number of well-known former internationals, such as Ivan Zamarano and Marcelo Salas. Club football is already a blind spot, except for Colo-Colo. As avid ‘Championship manager’ players of yesteryear, the club is the only one known to us in our research. For us, the name alone is a reason to visit the club. Tonight’s game against Huachipato is important for the home side to keep track of the championship. Colo-Colo is in second place, quite a distance from Universidad de Católica. In addition, the team feels the hot breath of number three Palestino on his neck.

We get on the subway prepared. The blond locks are covered in caps and the dress code is black. On the way, groups of Chileans get into the wagons, singing. The quality of the windows is then extensively tested, accompanied by the necessary hos. When getting off at the metro station it immediately becomes clear why we were advised not to travel here. We are met by a group of ‘ Garra Blancas ‘ (White Power), the hard core, and looked at from head to toe. The tallest of the bunch, who seems to have walked away from a South American gangster movie, gives us a nod of approval and with it a license to walk on. With pretended nonchalance we walk towards the stadium with valuable equipment in our backpack.

Again we are having trouble getting into the stadium. This time we have arranged tickets in advance through a Chilean friend, but the security is icy. The names on the card do not match. After having negotiated in broken Spanish for fifteen minutes, we enter, in exchange for a small donation. The game is already underway and we just miss the first goal, but not the cheering. The roar of the Chileans is typical and loud: ”OOOHHH” as you often hear in Spanish-speaking countries. Due to the quick lead, we immediately get a wonderful impression of an unleashed home port of Colo Colo.

We take our place on the jumping long east side and see that Garra Blancas dominate the north side behind goal. The club may have been successful, but it does not have the money to refurbish the stadium. The concrete crumbles like a bastogne cake, metal chairs squeak and creak, and it is infested with weeds. The stadium looks close to collapsing in some places, giving it an authentic football atmosphere. That observation is not unfounded. We speak to our neighbor who drily remarks that in 1993 70 people were injured during a match after part of the roof collapsed.

Our gaze falls on the separation between the long and short sides. Strangely enough, it is childishly easy to crawl under the fence and this is eagerly used. Then, to our great surprise, a wagging dog suddenly sniffs and disappears straight into the same hole. It all takes place under the watchful eye of a few soldiers who look as if they could be deployed to Syria at any moment. It gives a somewhat schizophrenic image, it is extremely difficult to enter the stadium, but once inside the belt is a lot less tight.

So far, the raw atmosphere has been the highlight of this crusade of Chile’s football stadiums. Colo-Colo is the epitome of South American football culture; a ramshackle stadium, many fences capped with barbed wire and ninety minutes of passionate singing. A number of members of the ‘Garra Blancas’ have entrenched themselves with face coverings on top of the richly decorated fences. It contains many canvases with, among other things, portraits of deceased members. The ambiance is more grim than at Catolica and Universidad . Especially when Huachipato manages to turn the early deficit into a 1-2 lead.

The sequel of the match

A handful of accompanying fans run and jump through the away section, making provocative gestures, but can’t be heard because of the deafening chants of the home team. The black and white army opens the throttle and breaks a lance for the team. You can feel the encouragement spilling over to the players. The team then plays all or nothing for the last 20 minutes and this ultimately results in the deserved equalizer. The supporters tumble over each other and the black and white chairs. Colo-Colo keeps pushing, but the winning goal does not come. The match ends in a 2-2 draw.

After the final whistle, we flee quickly. When the referee blows his whistle for the last time, it means alarm stage one for the police. The high walls surrounding the stadium grounds are continuously lit by lights from patrolling police cars mounted on the car mirrors. With an accelerated pace we try to keep sight of such a lamp and we eventually reach the metro station. We breathe a sigh of relief and look back with the stadium lights in our horizon, satisfied with this memorable visit to the most talked about football club in Chile.

This article was written by regular guest writer Rens, for which thanks! Send in your story too: [email protected] 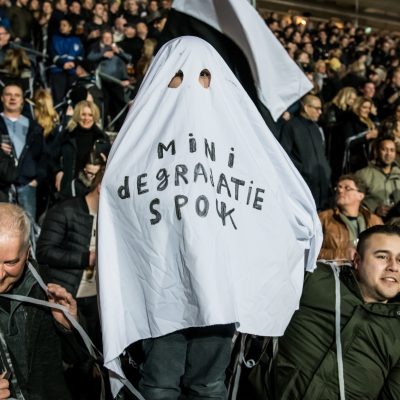